Budapest University of Technology and Economics – The Historic Campus 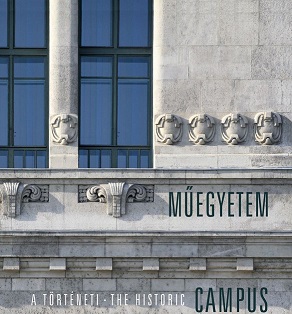 By the end on the 19th century the Royal Joseph Technical University has outgrown its buildings used for a decade and a half in downtown Pest, consequently a plot of land was assigned for a new campus on the Danube bank in South Buda. The new Lágymányos Campus was completed in just eight years during the first decade of the 20th century.

It was designed by three renowned professors of architecture: Győző Czigler, Alajos Hauszmann and Samu Pecz. The newly erected Campus is notable not only for the carefully considered concepts, but also for its architectural sophistication. The turbulent history of the past century, coupled with the advances in technology and the transformation of teaching methods, left its mark on the buildings, which have undergone many changes.

There are many surprises and interesting facts in store even for those who have spent years or decades at the University.

This volume tries to present a worthy account of the importance this building complex has had over more than a century. It wishes to address past, current and future citizens of Budapest University of Technology and Economics, as well as the general public with a wider interest in architecture and higher education.

The album received several awards at the Beautiful Hungarian Book 2013 contest, including the special award of the prime minister.

Budapest University of Technology and Economics - The Historic Campus